If any of you are familiar with the singer Troye Sivan you might know that he just dropped an entire new album on August 31st. An album I have personally been waiting a looong time for. His latest album, titled Blue Neighbourhood, wrecked me (in a good way) and I’ve been really excited to see what he would do with his next one. I feel like he’s grown a lot as an artist and has really blossomed into this confident and self-assured guy. Blossomed heh…it would almost have been too much had I written ‘bloomed’ since the name of the new album is Bloom ;P

But anyway, as I was saying, I’m just really proud of him and also a little mad/sad that he’s not coming to Europe, or more specifically Denmark, on his next tour… I’m just hoping that a Bloom World Tour will happen eventually. Or just any tour. I just really want to see him perform again!

So, as mentioned, the new album is called Bloom and it consists of 10 songs. 5 that were already released to the public and 5 ∼new∼ ones.

When I first listened to the album on Friday I had the idea to share my thoughts about each song with you guys, kind of like in those “Listening to … for the FIRST TIME” YouTube videos, just in a blog post format. Since it won’t exactly be my first reactions to the songs I might also find it easier to say something other than just ‘OMG’. It might be entertaining to watch that in a video but I have a feeling it wouldn’t have the same effect when reading it 😛

Now that the album and the ∼idea∼ have been introduced, let me go listen to the album again and get back to you with my honest opinion:

Seventeen:
One of the five ∼new∼ songs. It’s not one of my favorite songs on the album but I really like the chill vibe and I’m in love with the pre-chorus. And his voice, gaaaaah, it’s just so nice.

My My My!:
I’d already heard this one a thousand times and I’m obsessed with everything from the beat and the lyrics to the music video. It’s so cheeky and all in all just a bop.

The Good Side:
This. Fucking. Song. You guys, I straight up started crying the first time I listened to it. It’s so much more than just a breakup song. Somehow it feels so mature and wise and to think that he can write such beautiful lyrics is just mind-blowing.
I mean, just read this:
The people danced / to the sound of your heart / the world sang along to it falling apart
And:
So many thoughts I wanted to share / but I didn’t call ’cause it wouldn’t be fair
I’m pretty sure this is my favorite song on the entire album.

Bloom:
I’m very into the vibe and it’s the kind of song that makes me want to get up and dance. I also think the music video is great. It’s really different from the Blue Neighbourhood music videos and I love how he’s just creating what he wants to create. 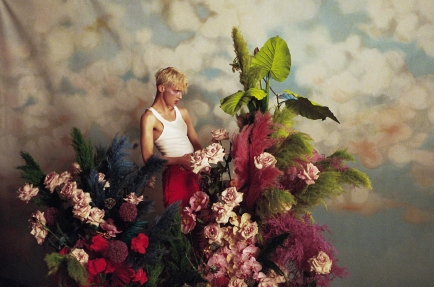 Postcard (feat. Gordi):
This was the first of the ∼new∼ songs on the album that really peaked my interest. By the third line I was hooked. The entire song is very pleasant, both their voices together and the melody as well.

Dance To This (feat. Ariana Grande):
Again, like My My My! and Bloom, this one is very upbeat and really groovy. Their voices go really well together and it has a nice beat. Also, the music video is so cool.

Plum:
Another song with a great beat, but not really any lyrics that stood out to me that much.I definitely like the song, and I think it’ll be a cool one to see him perform, but it’s not my favorite.

What A Heavenly Way To Die:
It’s very chill and mellow and I have a feeling it’s the kind of song that’s gonna grow on me the more I listen to it.

Lucky Strike:
I’m really into the sound of his voice in this one. It sounds really airy and light which I think is very nice. And the beat is awesome!

Animal:
This is probably my second favorite song on the album. There are so many elements to it that somehow all work together and on top of that, who would ever say no to a 4 1/2 minutes long song from Troye Sivan? I sure wouldn’t.

So yes, that was my opinion, and maybe all I did was basically say how great all the songs were in a bunch of different ways, but if you hadn’t figured it out by now I’m a big fan of his 😉
I hope it was enjoyable to read despite the lack of actual ∼musical knowledge∼ and criticism 😛

Have you listened to the album yourself yet? What did you think? Please let me know in the comments! ❤